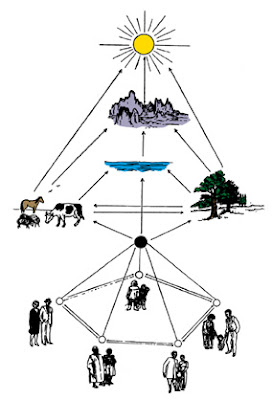 ‘It is this vision of an indivisible unity made up of energy, of sky, of rocks, of water, of life, of humans as adults and humans as children that lends a sense of the cosmic to Montessori’s thinking. This cosmic sense pervades all of Montessori’s work, both her thinking and her educational approach for all of the different planes and stages of development of the human being: from birth without violence to the Infant Community, to the Casa dei Bambini, to the elementary school, to the Erdkinder community for adolescents.  Quite clearly, then, this cosmic vision belongs by right to the whole of the Montessori movement: it is indeed the key which gives us a shared direction and a common goal in our work’.

Maria Montessori saw the first plane of development as being the start of cosmic education.  The child needs freedom to explore and absorb the environment.  They need to learn how to function and communicate in their immediate environment.  The adult in the classroom and the parent(s) at home need to learn how to observe, prepare and manipulate the environment and obstacles for the child in order to establish the greatest possibility for success and inner fulfillment.  The instructions for success are within the child just as the instructions for a seed are within that seed to become what it is meant to.  Both just need the right ingredients.  Both the adult in the classroom and parent(s) at home need to be more thoughtful of themselves and the child.  Thoughtfulness is a large part of what cosmic education is all about.  Your child’s education should incorporate a collaboration between home and school and not consist of two completely separate entities.

The six to twelve year old child is literally given the universe.  They receive a vision of their role as a human being from the first humans to the modern day human.  Very generally and literally speaking here is where they begin to learn how to function and participate in the world beyond their immediate environment.  A general to specific education is given at this age.  The child learns about the laws that the universe follows all the way up to the specific details and foundations of subject matter which is not limited to mathematics, language, science, and history, but everything in between.   The foundation of the elementary education is interdependence.    There is an interdependence that can be seen and felt between each other and subject matter.

The second component of Montessori’s Cosmic Education is what Camillo referred to in the quotation, as the ‘ vision of an indivisible unity …’ this determines the Montessori view of the Universe. In her book ‘To Educate the Human Potential’ Chapter 1 ‘The six-year-old- confronted with the Cosmic Plan’ Dr. Montessori describes it in this way, ‘Since it has been seen to be necessary to give so much to the child, let us give him a vision of the whole universe. The universe is an imposing reality, and an answer to all questions. We shall walk together on this path of life, for all things are part of the universe, and are connected with each other to form one whole unity. This idea helps the mind of the child to become fixed, to stop wandering in an aimless quest for knowledge. He is satisfied, having found the universal centre of himself with all things’

The third plane of development includes the twelve to eighteen year old adolescent.  Most people do not distinguish an adolescent from a child or an adult.  However, an adolescent can be characterized by that person which is no longer a child and not yet an adult.  They are more concerned with themselves constantly self-assessing.  There is regular critical thinking and self re-evaluation.  The adolescent is transitioning both physically and mentally.  This is where beginning to find themselves and their place in the world truly begins and should be nurtured.  Social and moral values are constructed and reconstructed.  Maria Montessori termed “Erkinder,” “Children of the Land,” as a key for the adolescent to unlock their innate powers.  A model of an education on a farm is where the child practices and learns for success in life.  All the subject matters can be learned and applied within a farm like structure and there is a co-existence between classroom learning, internships and farming.

When you perceive the differences between traditional western education and Maria Montessori’s concept of Cosmic Education you can only come to one true conclusion.  Cosmic Education leads to the probability of fulfillment while traditional education leads to the possibility of material success in some profession.  Education through Maria Montessori’s Method leads to material success and happiness as a side effect from achieving fulfillment; they are not the goals in and of themselves.    The goal of an education through Maria Montessori’s vision is that of fulfillment from birth through the age of eighteen.  This is the foundation for life, the rest is just details.
Posted by Matthew Simberg at 11:24 AM

Matthew, I am studying Social & Emotional Intelligence training at Wright in Chicago. I invite you to join us. You are a gifted seeker and you will find so much to add to your concepts/life by coming to our More Life Training Sept. 7-9 (www.morelifetraining.com). I am in awe even more of just how much Maria Montessori was ahead of the game given current research. Wright is super supportive of Montessori, Bob Wright has spoken at AMI Refresher Course/Administrators division. Join the "Unified Field" with us! email me directly with questions nanrenzi@sbcglobal.net

I have enjoyed reading your posts and I LOVE your thoughts and insights in the last paragraph! Thank you.

Thank you for reading and commenting! I am so glad you are enjoying them!

Nan, did you get my email?

Thanks for the best blog.it was very useful for me.keep sharing such ideas in the future as well.this was actually what i was looking for,and i am glad to came here!
magento development company in bangalore

Sahana,I apologize that I am just seeing this now! I am so glad that you found this useful. Thank you for following and leaving a comment!

About Matt - Montessori Seeds of Education

Check out our school!